Korea is home to some of the world’s most beautiful crags and gorges, and an ancient tradition of respectfully, ritually acknowledging the ‘spirits’ they embody. With more than 70% of the land raised towards the sky, the mountains and their brethren were soon seen as holy and sacred. As buddhism, daoism & neo-confucianism entered into Korea from China, they exchanged and melded icons with the native beliefs rather than merely suppressing them. San-shin became the central figure of all Korean religious culture, the most common deity, nearly universally revered.

This process is not just history, but is still evolving and even enjoying a widespread revival. Due to its association with all of the major religions that Koreans subscribe to, mountain-worship is flourishing in 21st-century industrialized Korea, a unique and valuable phenomena in our world.

One place where San-shin may said to be present is in the outskirts of Uljin. Here Chotdae rock rises above the horizon, and from the barren rock life springs. As a vertical crown the tree stands proud and creates an otherworldly scene. As a landscape in itself it represents the dichotomy of Korea, and in this contrast one finds the spririt.

In this land of culture and history, of ingenuity and knowledge, and in the land of legends and spirits a new step is taken towards redefining a centre of knowledge and learning. With the competition for Daegu Gosan Public Library comes a new challenge which seeks to continue the path set out from the temple of Haeinsa and the origin of print. It is a challenge worthy of a mountain. In a land carved from mountains a new landscape will grow. 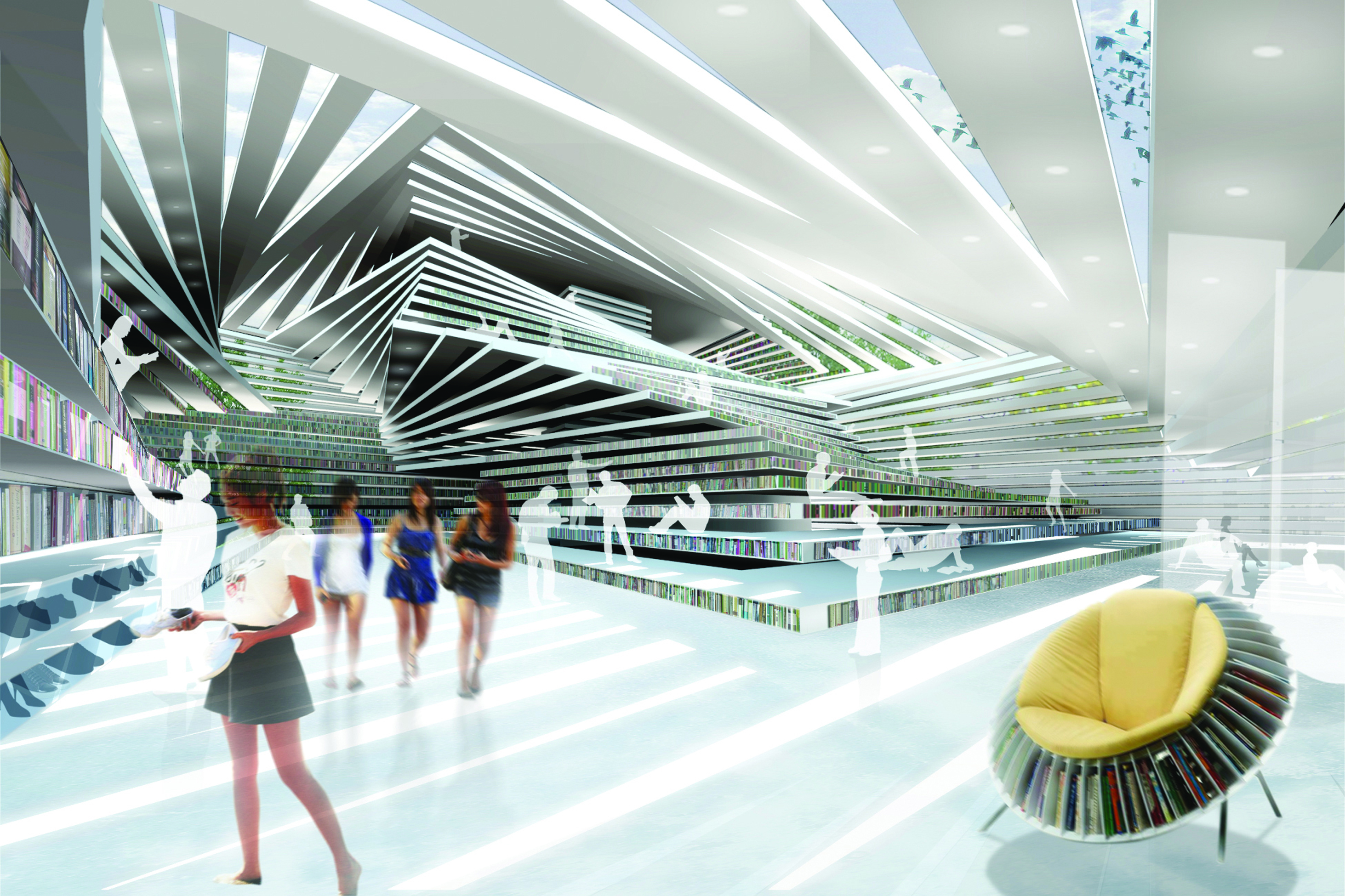 The site is 2080 m2 of which 60% is defined as the maximum footprint of any new structure. With a program that de- scribes a total area of 3100 m2 it follows that a single storey will not suffice. A layering of functions and uses then forms a natural conclusion in a land of layers.

But instead of imposing an introverted structure upon the site and decoupling the site from public users and uses, the sur- rounding public space can be extended into the functions of the library and thus becomes a part of it. The library should not negate the space which it inhabits, and nor can it, but instead offer itself to the use of the city.

As a sloping surface it would hold no value as a usable space but simply be a roof, turned towards the sky and the stars. Korea is a land of mountains and from this comes the knowledge of converting every surface to usable land, of converting impassable barriers into terraces for agriculture and dwelling. The terraces of the library therefore become usable spaces, spots for meeting friends or having picnics, areas of activity or rest – spaces for events or simply reading.

It is a library, yes, but first and foremost it is an urban space: a space for the city of Daegu and its inhabitants. The library defines a stage for the unfolding events of urban life, but also offers its own space as tiered seatings arranged towards a potential amphitheatre. It is a structure of internal and external relations, refering both to the theatres of ancient Greece, the heritage of Haeinsa and the spirit of Korean culture but also pointing forward through the reimagining of a knowledge-space.
Because it is not only a space _for_ knowledge, but a landscape _of_ knowledge.

When entering this terraced landscape you gaze upon the cascading levels of the interior. Books surround you, above and below; they create the space and they are the space. This landscape of knowledge is never static as its use constantly fluctuates. The terraces are all bookcases and steps, seating and tables, resting spots and reading areas. Every surface is a chair, a table or a step. And as people sit and read, seek out information or simply enjoy the unique atmosphere, the pattern of its use changes.

The library is a constantly changing space, defined by its users and not dictating its use. In the upper levels of the library the space is open and invites a less formal interaction between users. The twisting of the structure creates a variation in the widths of the terraces opening up for a wider range of uses, and in the widest sections new elements can be pulled out to form new spaces. The whole of the building references the Chtodae Rock of Uljin-gun and is crowned by a solitary tree under which a green space provides a spot for contemplation and reverence.